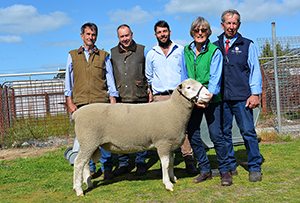 Saving the best until last could well be the catchcry of the final combined Leenala and Wrattenbullie Poll Dorset ram sale at Naracoorte Showgrounds on Monday afternoon.

After 59 years of very successful Poll Dorset breeding and 35 years of annual sales the Schinckel family’s offering of 12 stud rams and 112 flock rams was their last, with their final ewe dispersal sale held in the morning of this sale.

The Davies family of Rod, Gayle and Brad also offered an outstanding run of 2 stud and 95 flock rams, but will continue next year on their own with an increased offering, but for Alan and Lyn Schinckel, their last sale probably produced their best ever result.

It was certainly Leenala’s best stud ram result. While they have achieved a higher top than the $9000 top in this sale, the average has never been higher, with 12 rams averaging $6292. Wrattenbullie also sold their two stud rams at a $3200 average, topping at $4000.

The $9000 top price was achieved twice, firstly by lot 2, Leenala 160150Tw, sired by Hillcroft Farms 130497. With a swag of ribbons at Hamilton and Adelaide, it was snapped up by Brett Shepherd, Mullinger Park stud in conjunction with fellow sale vendors, the Davies family, Wrattenbullie stud, both buying through SAL Naracoorte. Beautifully balanced and with great lift and extension, it also boasted balanced Lambplan figures including 14.5 Pwwt, -0.7 Pfat and 1.5 Pemd.

The magnificently grown and presented 207 flock rams from both studs followed and when George Kidman, Limestone Ridge through TDC Penola took all three in the first pen at $2000 each, there was every indication the heat was on.

This proved to be the case as the two studs alternated their drafts of nine rams in pens of three; Leenala selling 112 and Wrattenbullie 95, achieving a total clearance.

Brian Johnson, LS Johnson & Son and Dene Hampel, SAL Mt Gambier were given special mention pre-sale by Alan Schinckel for their long and loyal buying support for this sale. That support continued as strong as ever in this sale, with Brian and family purchasing 28 rams through Elders Naracoorte to be the biggest volume buyers by a fair margin. They paid to $1900 and averaged out their buying at $1629, purchasing 14 rams from each vendor in the process.

Dene Hampel has brought a group of buyers to this sale each year, or their buying orders; this year handling eight buying accounts with most present. Collectively they purchased 39 flock rams plus one from the stud ram draft, averaging $1785 for the 40. The most prominent amongst them were PG & AJ Gordon with 10 to $1900 and average of $1630, JA & DM Hunt with nine to $1700 ave $1456 and Wally and Veronica Jenkin, Nayook South with seven to $2000 ave $1800.

Buying exclusively from the Wrattenbullie drafts, Locmaria through PPH & S Naracoorte was the second highest individual volume buyer with 17 rams to $1900 and ave $1706.

Martin and Kirsty Flower, Morambro Pastoral, Frances were strong and consistent bidders, purchasing 14 rams, with all but one from the Leenala offering, buying through PPH & S Naracoorte. They averaged $1764 and their purchases included the very last ram to be offered by the Schinckels, a top ram specially held back for this milestone. Bidding was strong from several bidders with Morambro pushed to the top flock ram sale price of $2700. This amount will be kindly donated by the Schinckel family to the Leukemia Foundation for research, having two close friends suffering the consequences of this disease.

Gayle Davies made a lovely presentation of flowers to Lyn Schinckel as a final tribute to the wonderful efforts the Schinckel family had put into not only this sale, but also the Poll Dorset breed and the lamb industry. In a closing tribute, Rod Davies thanked everyone for their support and invited them back to the increased sale offering by Wrattenbullie next year.